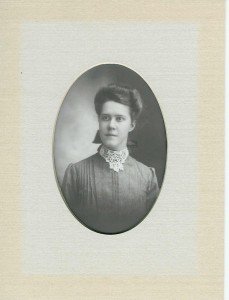 My mother was the daughter of a young Swedish woman who emigrated to the United states when she was 18. She had an older sister Mathilda and an older brother Philip. They lived in East Providence, Rhode Island, and life was a struggle. My grandmother supported the family by doing laundry for the wealthy and later took in “boarders,” which was common in those days. Photo: Alice Ardena Erickson Davis at 17 years.

When my mother had completed the eighth grade (probably fourteen years old), my grandmother insisted that she give up school and get a job to help support the family. As she was a very bright student, her teachers were dismayed – as was my mother, I’m sure. However, this was not an uncommon scenario in the late 1880s.

It would be difficult to reconcile the woman she eventually became with the girl of limited schooling. However, education sometimes is achieved in different ways. My mother loved to read, and consequently her vocabulary and knowledge of grammar were excellent. My sister referred to her as “my dictionary.”

When my mother was a very young girl, she had the good fortune to make the acquaintance of a couple of retired missionaries, who took her under their wing. The Kents were not only well educated but also cultured. (There is a difference.) They were interested in music and I assume that is how my mother learned to play the piano – not to perform, but sufficient to accompany herself as she sang in a fine alto voice. My mother spent much time in the Kents’ home and benefited from exposure to their gracious lifestyle. She was as fond of them as they were of her and, especially in her later years, she would speak of them and the things they had taught her.

My mother was an amazing and accomplished correspondent. Her arthritic hands produced countless pages of carefully written letters. She wrote to family and to friends. And occasionally to persons whom she did not really know but felt a concern for them. On occasion, word would come back to me about how much her letters were appreciated. At her funeral I spoke with a man whose family relationships had deteriorated and he had gone to live in Chicago. He told me that all during those troubled years my mother had written letters of encouragement to him – and that he still had her letters, a shoebox full.

She cared for animals, too, and many were the cats and dogs who found their way to our home over the years. There was always a dog in the kitchen waiting to be “noticed,” as she would say, and a cat curled up at the foot of my mother’s bed.

My mother was reputed to be very “proud” as a young woman, but life gave her such a battering, from which she emerged a truly caring person. She cared about her many relatives and friends, knew the names of their children and followed their activities. She was “Gram” and “Aunt Alice” to so many and is remembered with love. To us, she was “Ma” or “Mama.” I wish I had showed more how much I cared for her and respected her. I hope she knew.