The first Community Workshop for the City of Greenville Bicycle Master Plan was standing room only at the Hughes Main Library last night. The workshop combined an introductory presentation by project team staff and opportunities for community feedback. The attendees were handed voting devices as they checked into the workshop. Polls were interlaced with the presentation and the results were immediately presented on-screen. At the end of the workshop, attendees could head to breakout sessions where their input was recorded to be published in the public input section of the master plan. 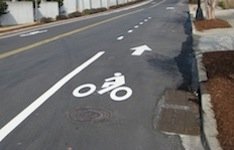 City Council Member, Amy Ryberg Doyle, gave opening remarks which showed the enthusiasm that the City of Greenville has for the vision of the Bicycle Master Plan. She talked about Greenville’s Complete Streets Policy and its diverse benefits from safer vehicle speeds to attracting educated workers to Greenville. As Jeff Olson of Alta Planning explained the League of American Bicyclists’ Bicycle Friendly Community awards, a timeline for Greenville attaining the Platinum level award by 2010 was displayed on the presentation screen. There are currently only three cities in the country who have attained that level: Davis, CA; Boulder, CO; and Portland, OR. Greenville has set the goal of being the first Gold and first Platinum level city in the East. 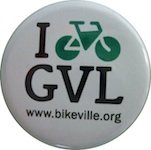 Not surprisingly the community workshop was primarily attended by community members that are in favor of transforming Greenville, SC into a more bicycle friendly city. The two voices that expressed concerns and frustrations were a reminder of the tensions between some cyclists and residents. The workshop was a good opportunity for cyclists and motorists to hear each other’s perspectives. The discussion also included other livability factors such as the walk-ability neighborhoods. The “East North Street” project was applauded and one attendee, Bryant Young, directly attributed his own family’s increased mobility to the success of the project. Bryant described his family as having been previously trapped in their own home, having to drive outside of their neighborhood to get exercise.