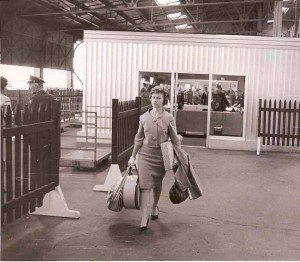 I’m writing from the Pacific Southwest District Annual Assembly in Riverside, CA where I’m having a great time so far. However, my thoughts are with my mother who turned 80 today in South Carolina – so far away! I managed to put together a gift basket and get it in the mail in time, which if you know me was a big accomplishment. I filled it with goodies including little chocolates that my mother likes to have after dinner, a yummy smelling candle and to make it a “turning 80” theme I added a box of “Senior Memory Mints.” (I could actually use memory mints myself!)

My mom spent the morning as she does every week, teaching English as second language as a volunteer. I was so pleased to hear that they brought her a cake and card, since I can’t be there to make the fuss over her I would like to today. I blogged about the picture of my mom boarding a ship in a recent post. She was 35 years old when that picture was taken in 1962. The other photo was taken when my mother and father were married in 1965 in Mexico. They met at an embassy party when my mother was working for the foreign service in El Salvador. She had just been transferred there after living in Holland for years. My father was there temporarily as part of his work for the Atomic Energy Commission (now the Department of Energy). 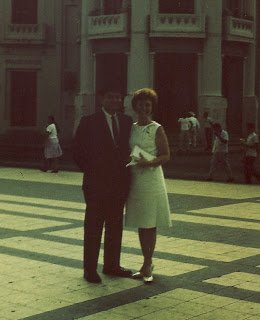 That’s my mom: beauty, brains, class and compassion. I’m so proud to be her daughter!
(imagine my mom extremely uncomfortable right now protesting the compliments)