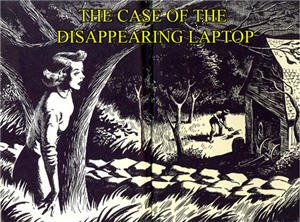 Well, now you really can picture me using my laptop… actually a new laptop. I was contacted late Monday afternoon by an HP case manager which is apparently related to the “Escalation Team.” At first this was not a good thing, because I played phone tag with him until late the next day. When we finally spoke he hadn’t received any of my messages. Sigh. Surprisingly, the case manager seemed as clueless and helpless as I had been about what was going on with my laptop repair. He simply stated that I had been waiting too long and that he was offering me a new laptop instead. I had to agree to have one with Microsoft Vista otherwise I would continue to wait for the repair of my laptop with no word on when it might be repaired.

After a few questions about software compatibility, I agreed to the replacement and received my new laptop Thursday night. I’ve been working on installing and setting up my usual software ever since. It’s a little newer and faster model which is nice. Having Vista has been OK so far with relatively minor complications. I guess I’m lucky compared to the woman in this story Case of the Disappearing Laptop who had to deal with the extra layer of bureaucracy of Best Buy when HP lost her computer. I’m just happy to get myself up and running again here at home. You can bet I’m already backing up too!