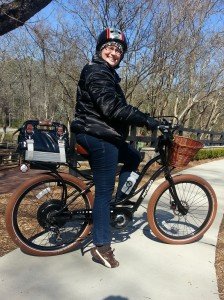 You may have heard the term bike-friendly which is used by the League of American Bicyclists in official designations for states, communities, businesses or universities. The new advocacy group we have started here in Greenville, Bike Walk Greenville, is working to make our county both more bike- and pedestrian-friendly.

When it comes to biking around town, I like to bike friendly – meaning I smile and wave a lot. This is actually a conscious decision on my part. I was your typical urban citizen used to rushing through my day without much interaction with those around me. Moving to Greenville, SC I had to get used to how friendly everyone was. It brought back the memory of being in the car with my dad after he moved back to Laurens, SC (he grew up in the area). I was sinking in my seat embarrassed by his waving at everyone we passed by driving down the road. I thought he’d lost his mind in his old age. Now I think back with much kinder thoughts. I’ve come to appreciate the friendliness. So as I ride my bike around town I make a point of smiling and waving, remembering Dad’s example.

The more involved I’ve become in bike advocacy I realize the importance of biking friendly around town. People on bikes are often viewed as “those bike people” not as the neighbors they are. It doesn’t help that many of the cyclists out there on the road are the opposite of friendly – breaking laws and zipping past people without any sense of being in relationship with people who aren’t on bikes. I think one of best ways to get more support for creating bike-friendly communities is to act like members of a community when you are on your bike.

At a bike club meeting, someone reported that their neighbors who were unhappy with the cyclists on the roads said that the cyclists don’t wave. That made me realize that my habit of waving and smiling was more than just a personal commitment to being neighborly. I’m bringing a friendly face to cycling and hopefully opening minds with each ride.