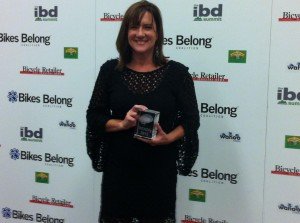 Greenville, SC is home to the first women-specific cycling shop and boutique in the nation – Pedal Chic. On Wednesday night, Founder Robin Bylenga received the BRAINy award for Best Bike Shop for Women at Interbike 2012 in Las Vegas. “We’re proud to be on the forefront of empowering women by combining fitness and fashion along with re-discovering the unique freedom of riding a bike.”

Bylenga is also one of the founders of SpokesWomen, a professional networking group for women in the cycling industry. Carolina Cycling News attended the networking event hosted by SpokesWomen and the Outdoor Industries Women’s Coalition (OIWC) in the OIWC Women’s Lounge at the Interbike Expo. It was well attended, far surpassing last year’s numbers and spilling out into the surrounding aisles.