You may have noticed that here at Carolina Cycling News we tend to emphasize road racing. It’s not entirely on purpose. Neil is just a roadie at heart who loves cyclocross while I’m a cycling fan and recreational/commuter rider. Although we don’t get much chance to ride the trails with mountain bikers, we love opportunities to give publicity to our cycling cousins. We had a great time covering the Alley Cat races that started in Greenville and that is how we first really met Jeff Papenfus, their founder. Prior to that we had been Internet acquaintances with a casual advertising exchange with his venture, Go-greenevents.com. Our tall banner ad continues to run on the site. More recently I had approached him about collaborating on mutual promotion of our two sites. It seemed a natural fit, two Greenville, SC based companies looking to help organizers make their events successful. We had just begun to work together on that project.

As news of Jeff’s death while mountain biking spread, an outpouring of testimonials (on blogs, Facebook and forums) to his character and positive impact on individuals, cycling and economic development in Greenville. His loss is felt keenly by those who have known him a lifetime or had thought they would have a chance to get to know him better. We fall in the latter category. While we were aware of his involvement and leadership in outdoor activities like mountain biking and adventure racing, we did not yet understand his role as a business leader. It has become obvious that we only experienced the tip of the iceberg that was Jeff’s impact on Greenville. In a GreenvilleOnline.com article, Jeff was described as “a perpetually smiling tech leader who helped change the way the area nurtures start-up companies, and who never refused to help anyone.” Another GreenvilleOnline.com article included:

“Mayor Knox White said Papenfus was the first person with his own business to articulate to him the challenges faced by start-ups, and how Greenville could nurture them.

In a sense, he was more the Silicon Valley type of entrepreneur, with a large network of relationships, a ‘visionary’ mind and an active outdoor lifestyle, said John Moore, executive vice president of the Greenville Chamber.” 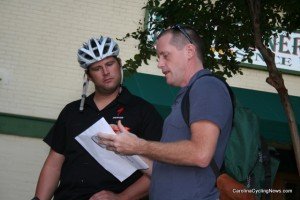 There had been much confusion and speculation on how Jeff had crashed during the bike ride. An account of what happened that day was shared on a SORBA online forum. Although it was initially thought that he died from a neck injury or bee stings, the GreenvilleOnline.com’s August 4th article reported that the cause of death turned out to be a heart attack, “We did an autopsy and all we found was a bad heart.” Discordant words to describe someone who was known for having a very good heart.

We attended the memorial service held on Friday, August 5th at Paris Mountain State Park in the Amphitheater. The beautiful setting and speakers from Jeff’s family, cycling and business spheres combined to create a touching memorial for his life that will continue to inspire many. Additional memorial events include a gathering at Chicora Alley tonight starting at 8PM (after Donaldson center (SCTAC) ride) to celebrate Jeff’s life and retire his team jersey. There will be two kegs of beer donated by Chicora Alley.

A memorial fund has been set up in his honor and the donations will go to organizations that Jeff cared about including: Upstate SORBA (local chapter of the Southeastern Off-Road Bicycle Association, IMBA affiliate), Greenville County Recreation District (Trails Division), American Heart Association, City of Greenville Mountain Bike Trails, and Paris Mountain State Park Friends.

Perhaps we can never know the full impact of a person’s life until it is revealed by the sudden holes created in our daily lives by their loss.