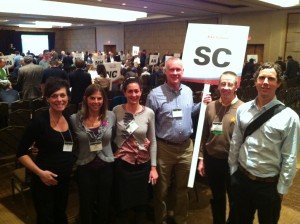 Bike Month isn’t until May, but you would swear it was March from all the activities for Carolina bike advocates this month. The League of American Bicyclists’ National Bike Summit was held in Washington, DC last week, March 8-11. The first-ever Bicycle Friendly University designations were announced, recognizing colleges and universities that create exceptional environments where bicycling can thrive. Among those receiving Bronze awards were two Southeast Universities: University of North Carolina, Greensboro – Greensboro, NC and Emory University – Atlanta, Georgia.

“Universities have long served as incubators for developing bike-friendly cultures and practices, and that has a big impact on the expectations that students bring to the workplace and beyond,” said Bill Nesper, director of the League’s Bicycle Friendly America Program. “With the launch of the Bicycle Friendly Universities program, we’re able to highlight the crucial role that academic institutions play in shaping a more bike-friendly future.” 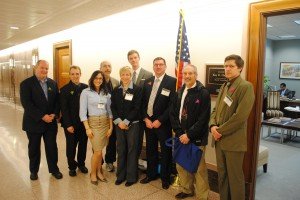 A mybikelaw blog post reported that the South Carolina group of advocates consisted of Palmetto Cycling Coalition Board Members, City officials, business owners, and the Director of mybikelaw. The Charlotte Area Bicycle Alliance reported that there were 20 delegates from North Carolina. More detailed updates on the bike summit were posted on the Cape Fear SORBA blog: Day 1 – Day 2 – Day 3.

If you are from Greenville, South Carolina you may have noticed a familiar face in the photo of SC advocates: City of Greenville Urban Designer, Andrew Meeker. After returning from the National Bike Summit, he and the rest of the Greenville Bicycle Master Plan team hosted the second community workshop where about 200 attendees were given the latest results from the public survey and an overview of the draft bicycle master plan. The plan’s Education goals include establishing safety training and accident reduction for the entire community. One of the Encouragement goals is developing strong advocates for biking with the specific objective of establishing a non-government advocacy organization in Greenville. The Encouragement recommendations include establishing a one-stop bicycle information website, expanding the Safe Routes to School program, a Bike Station facility, hosting car-free street events and a bicycle sharing system. The draft plan will be available for public review and comment until April 4, 2011.

On March 22, Anderson, South Carolina with the Complete Streets Advisory Committee and Great Escape Bicycles are hosting the Electric City’s first bicycle master plan workshop. The meeting will be at the Anderson Recreation Center at 6:00 pm. In the meeting, the Advisory Committee hopes to gauge citizen interest in Anderson bicycling opportunities. Contact Blake Sanders for more information.

Later this month there are two regional events being held in the Carolinas. Southeast cyclists will be gathering in Charleston, South Carolina for the Bike!Bike!Southeast! conference on March 25-27. The conference seeks to empower individuals and organizations by sharing ideas, critiquing successes and failures, and establishing an on-going community network of support between cities. The conference is unique in that its workshops are proposed and facilitated by attendees. Topics generally fall in two broad categories– developing technical bike maintenance skills and collectively managing an organization.

In Brevard, North Carolina, the first Southern Mountain Bike Summit is being held from March 25-27. Land managers, industry leaders, politicians, and mountain bikers are gathering in the scenic mountains of western North Carolina to teach, learn, meet, greet, ride, and grow the sport of mountain biking in the Southeast.

Looking to the future, the first annual Carolina Bicycle Summit which is being planned by the Palmetto Cycling Coalition with partners in North Carolina will be held in 2012.

3 thoughts on “March is busy month for Carolina bike advocates”