This past week I joined over 800 cyclists from 49 states who gathered in Washington, DC for the National Bike Summit. As commuter cyclist and bike racing fan here in Greenville, I arrived looking to learn from leaders in South Carolina bike advocacy and discover how I can best contribute to the work already being done to make Greenville safe for cyclists and pedestrians. Both presidents of the League of American Bicyclists and the IMBA kicked off the first timers session, which focused on preparing us for the 3rd day of the summit: lobby day on Capitol Hill when bike advocates attend scheduled meetings with their members of Congress. Mike Van Abel said that the League has developed expertise in transportation policy while IMBA’s focus has been natural resources. I could have used some advice on keeping up with the hectic pace of breakout sessions and keynote speakers on Wednesday, but sessions were organized by Summit Tracks to help choose between the many topics available in the session time slots. I would have attended every one of them if I could have, but I ended up attending a combination of the economics and new technologies & media tracks.

The evening’s program was a dinner with keynote speaker Mark Mckinnon, a former presidential campaign and chief media adviser. His talk was also geared towards preparing advocates for their meetings with members of Congress. The clips from old campaign ads and speeches showed us examples of successful and failed attempts to engage voters by telling a story that connects on an emotional level. One of the most memorable was Clinton’s speech in which he repeated the phrase “bridge to the 21st century” an unbelievable number of times. Its powerful ability to imprint on listeners’ minds continued as it was echoed throughout the conference. One of my favorites came during a practice exercise for advocates in which they pretended to be running for president. One woman’s impromptu speech culminated in saying that the bridge to the 22nd century has a bike path – love it! 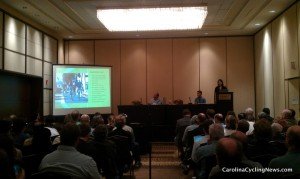 Connecting with cyclists online has been an growing focus of ours since we first started running live chats for Versus.com during the Tour de France, so the session on “Increasing Engagement Through Online Advocacy” naturally grabbed my attention. Attendees heard about successes, lessons learned and useful tools.  If you are trying to get cyclists engaged in your area through emails, keep your expectations realistic. According to a benchmarks study, you can expect 13% of your readers to open the email and 3.3% to respond to a simple online task (i.e., signing a petition, emailing a legislator). Great advice from Meredith Begin of Food & Water Watch: use a Ladder of Engagement to slowly step up potential advocates by asking them to complete slightly harder tasks. Great first step: Ask them to “Like” your Facebook page.

Before moving to Greenville, we lived in Long Beach, CA for 15 years enjoying the great bike infrastructure including the Bikestation where I would park my bike and then catch the metrorail to Los Angeles where I was a transportation planning intern. The session on “Boosting Economic Vitality in Cities” included a report from April Economides, the program manager for the City of Long Beach Bicycle Friendly Business Districts – a first in the nation. Through this pilot program business owners in the four identified shopping districts were transitioned from having ambivalent or negative perspectives to being enthusiastic about the “business case for bicycling.” Since the start of the program in 2010 they have experienced the benefits of being bike friendly: new customers, solution to parking issue, and safe streets that attract moms. I would love to see the Bike Saturdays program implemented in Downtown Greenville giving discounts to customers who arrive by bike.

With a strong racing scene here in the Carolinas, I was interested in the “Finally, the Racing and Advocacy Worlds Collide” session. We heard from nearby Eric Broadwell of Be Bike Friendly in Roswell, GA as well as Tim Miller of the 2015 World Cycling Championships in Richmond, VA. The conversation really started though when six-time national cyclocross champion Tim Johnson got directly to the divide between racers and advocates. He said that when he started in mountain bike racing, advocacy was an integrated part of the sport. However, when he transitioned to road racing he never heard about advocacy issues. Johnson pointed out the obvious disconnect – USA Cycling was not in the room or at the conference. A number of racers and advocates attending discussed the issues including industry legend Gary Fisher. Some of the expected tensions surfaced including whether cyclists are observing laws when they are out on their bikes. Hopefully the discussions between individuals will continue and grow into a greater connection between organizations. After the session, it was great to hear Fisher congratulate Johnson for getting good PR for the cause with his 2nd annual Ride on Washington which had been featured in the Washington Post.

First post in a series on the National Bike Summit. Coverage sponsored by the Greenville Spinners Bicycle Club and Bike Law.