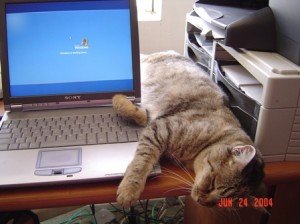 I wrote this on December 11, 2005 after the traumatic loss of our cat. It was the end of a few weeks of thinking we just needed to pay for her thyroid treatment and she’d be OK. But we only had her home for a few hours when much to our horror, she quickly slipped into seizures. My previous post about pet loss brought back our experience and I decided to pay tribute to our friend who is still very missed.

We lost Topaz last night. Still can’t really believe that she is gone. I don’t know how her journey began, but our paths crossed when she was living with a cat colony in the rocks along the Long Beach shore. I remember when we found her, or she found us. We would sometimes go for a walk down by the water. One day in the summer, she came right up to us and when we sat down she jumped in Neil’s lap. We were so taken by surprise because those cats usually won’t come near you. We didn’t decide to try to take her in until later. We were out for a walk in the fall and she was still there. Still came right up to us. We tried to catch her but she fought us. It seemed like she just wanted us to move in with her, not the other way around. Finally, we managed to get her into a carrier.

When we brought her home we put her in the “dressing room” area off of our bedroom. She didn’t want to leave that little area. She slowly over time began expanding her comfort zone. She was terribly afraid of the outer edges of the apartment so she couldn’t enjoy the windows like other cats do. I kept hoping she would get to that point so she could have more pleasure in her life. It took at least a year but I was so happy the first time she looked out a window.

I had the feeling that she would get claustrophobic sometimes. For no reason she would start meowing frantically at our door. There was no where for her to go – just the hallway of our apartment building. I think it was really nice for her when we moved to our new apartment with a big (huge!) balcony. The cats love to lay out there in the sun and watch the bugs, birds and lately our local squirrel… Mostly though she just liked to be with us.

I’ve never known such an intense soul and feisty spirit. She would look you right in the eye, cat or human. If she wanted to be close to you, she would rub her snout on your face. She especially liked my husband Neil’s chin when it was covered in stubble. If she was mad at you, she would pop you one right on the side of your head. We called her our little pugilist and our tough little rock kitty. When I was feeding all the cats canned food, the cats would gather expectantly in the kitchen. Topaz would walk right up to them, looking them square in the eye and then bam, a quick whop on the head. We figured she had to fight for her food when she lived in the big cat colony. Even after all those years that she got her own plate and had plenty of food.

When Neil and I would hug, Topaz would be right at our feet meowing to be included in the moment. She was never completely happy unless she had both of our attention. That was bliss for her. For some reason she loved mirrors. Jumping up on the bathroom cabinet and looking in the mirror with me seemed to make her so happy. I don’t know what she could see… did she see herself? did she see me? she seemed to respond to my image in the mirror, but I will never really know.

She was the only cat we had that really enjoyed being held. I would hold her and carry her around. She was such a small thing, even before she got sick.

Topaz had this amazing sense of subtle drama. She was always talking to me, meowing and I would talk back. But she seemed to know how to amp up the drama. Show just how forlorn she was about whatever she had on her mind… being fed or getting attention. She would do these dramatic silent meows. Her meows would get quieter and quieter until she made no sound. Just opening her mouth as though she was meowing. And I would do the same to her and we would go back and forth until I picked her up or fed her.

It is hard to do her justice with just words. I like telling stories about her in person because my animations add some of her spirit to the story. One of my regrets is not being a picture person. I would have been so grateful for a picture of her that showed her personality and pretty coloring. The inpiration for her name came from the orange spot in the middle of her forhead… a little golden jewel. The picture above is the best we have and there’s a darned date stamp in the middle of her head.

2 thoughts on “Ode to Topaz”