The Women Bike program of the League of American Bicyclists has been posting some pictures showing biking as a great way to achieve New Year’s resolutions. My favorite was the resolution to feel like a kid again. That is definitely a big part of how I approach exercise. I want to recapture that time in our lives when we move just because it feels great not because it is something that we should do. When I was a kid I would have thought you were crazy not to want to ride your bike to wherever you were going and bursting into an all out run just felt awesome! I exercise to feel good today and to feel good tomorrow. Now if I could just find an app that lets me track how great I feel and how much fun I’ve had, instead of the calories I’ve burned. Today’s bike ride would have been at least 3 smiley faces instead of however many apples CardioTrainer said I earned. 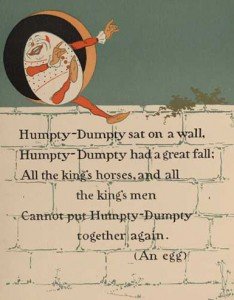 Another thing we tend to want back from our youth is that belief we had in things like Santa Claus. A lot of people have continued to clap for Lance Armstrong, one of the Tinker Bells of our adult lives, but the hope and clapping faded as it became public that he would be admitting to doping. As we watched Oprah’s extended interview with Lance Armstrong, I couldn’t help but think of the old nursery rhyme about Humpty Dumpty. There was Lance trying in vain to put it all back together again. Everyone but Lance can see that his attempt to spin a new believable story is futile.

As someone who was once a believer it is hard not to feel sad about losing the sweet innocent hero story we loved to cheer for, especially when it is tied to the personal cancer stories of so many loved ones. Those days are long gone for us though as we were some of the “others” that are mentioned who were caught in the wake of Armstrong’s wrath. Both directly from Lance as well as from others in the wider circles who pulled funding from our local cycling website and stood in the way of other opportunities. I’m looking forward to seeing the Armstrong era disappearing far in my rear view mirror (bike mirror of course).

2 thoughts on “Some innocent times can be recaptured”