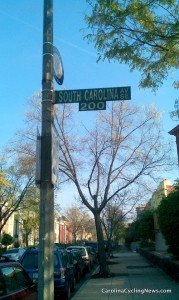 The full day of sessions was packed with information focused on either preparing advocates for meetings with their members of Congress or sharing information to help them succeed as they returned to continue their local efforts. During the lunch session, we had a presentation that aimed to help us communicate effectively with Generation Y. Most of the advocates actually would be meeting with a staff member rather than the elected official themselves – and most staffers are quite young.

According to Gen Y’s communication preferences, it might have been more effective to get their mobile number rather than schedule face-to-face meetings since texting is at the top of their list. Email is their second favorite but beware, they only read the subject line. Their next preference is social media and the advice from the session on online advocacy reminded us not to worry about duplicating the message – “repetition, repetition, repetition” is still a marketing truth. If you’ve been calling a Gen Y and not getting through, it’s not personal. They do not like phone calls and consider them to be an intrusion.

Advice for the meetings included telling Gen Y the point of our message immediately – they’ll follow what you are saying better if they understand where you are going from the start. Since Gen Y typically values lifestyle over work, cities have another reason to prioritize making their streets bike friendly to assure their economic success into the future. 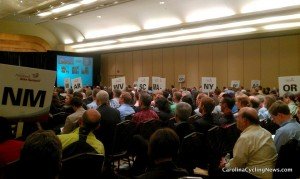 The third day of the summit was Lobby Day and was devoted to the meetings on Capitol Hill and I attended meetings as part of the group from South Carolina. Our fearless leaders were Rachael Bronson, Executive Director of the Palmetto Cycling Coalition (read her report) and Natalie Cappuccio Britt, Executive Director of the Palmetto Conservation Foundation who had collaborated to produce an overview of bike projects in South Carolina to give to the members of Congress. Along with communicating the many benefits of bikes being integral to all transportation planning, part of the goal of these meetings is for staff members to see bike advocates as a valuable resource to contact whenever they are working on transportation policy.

As a first time bike summit attendee, I enjoyed meeting other advocates from around the state and hearing them talk about the efforts in their communities. Steve Hawley of Hawley LLC in Lexington, SC told the story of his company’s economic success and growth during these tough economic times – an example of the “business case for bicycling.” Hawley said that his company’s business has particularly grown in areas that have invested in bike friendly infrastructure. Frank Babel from Hilton Head, SC talked about the efforts that went into becoming recognized as a Silver level Bicycle Friendly Community and the benefits his community is receiving as a result in terms of economic success and livability.  Tom Bradford and Don Sparks, both on Charleston Moves’s executive board, spoke about the broad spectrum of people that are being served by bike friendly infrastructure from the more visible enthusiasts speeding by in lycra to the invisible citizens commuting as part of their daily lives. Benjamin Gruber, owner of Trek Bikes of Mount Pleasant, said that more bike shop owners should attend the National Bike Summit and that he found it “revitalizing.” 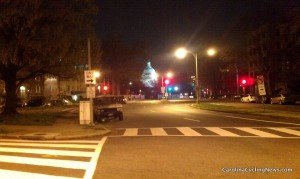 When talking about the Upstate, the economic benefits of having the USA Pro Cycling Championships here was a favorite topic. I talked about the recent growth of bicycle tourism in our area as well, and the importance of Greenville’s increasing bike friendly infrastructure in attracting companies from BMW and Michelin to the vibrant tech entrepreneur community downtown.

I spoke from personal experience too as it was one of the primary factors that led us to relocate from Southern California a few years ago. While everyone in our group continues to push for improvement in our state, especially when it comes to safety, I was proud to be representing Greenville, as a Bronze level Bicycle Friendly Community.

This is the 2nd post in a series on the 2012 National Bike Summit. Coverage sponsored by the Greenville Spinners Bicycle Club and Bike Law.