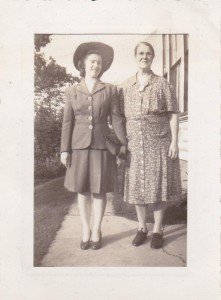 Do you know your family history? I suddenly found out who I am. I knew a part of it. My father’s side. He had been researching and collecting for a long time. We spent summers in oddly placed graveyards. One of the most important was a little family one in the middle of a cornfield. Each summer we would make the drive down the east coast. Through southern state after southern state. Into the Tennessee mountains. I met family but never really knew them. You could say my dad was more interested in dead people – LOL

Back to the recent discovery. My maternal grandmother’s history. I always felt closer to my mother’s family – New Englanders – because I spent more time with them and staying connected to family is important to my mom. My grandmother and my aunt Beryl both loved animals and were known for taking them in like me. But Grammie was was already 80 when I was born and died when I was about 13. Just when I was getting old enough to really know her as a person. Aunt Beryl was 52 when I was born and died when I was about 26. I’m supposed to be a lot like her. I knew my mother heard Swedish spoken at home until she was 10. That’s when my great-grandmother died. Gram Erickson had come from Sweden in 1876 when she was 18, but that was about all we knew. So I’ve been in love with IKEA and anything else remotely Swedish that I ran into. Trying to catch a glimpse of myself.

But suddenly since June, detail after detail has become known. The ship she arrived on. Her real name – Kjersti (not Chesta as she was named upon arriving in New York). Her father Ola Bengstsson. Her siblings – Hannah, Bengta, Anders, and twins Thilda & Benjt. Records of baptisms. The actual baptismal font. The remains of the tenant farm in Stoby, Sweden where they lived. The lots were numbered so Kjersti was a “fiver.” My cousin took pictures of these places. And now I know that I am a descendant of Bengt Olson from Åbuen, Sweden and Kjerstin Isacsdotter from Örkened, Sweden. I know that Kjersti’s family was struggling to survive through a terrible time of poverty in Sweden. She and her siblings had to sell everything they owned to buy passage to America. Surviving a difficult journey on a ship called the SS Egypt. Risking everything for a chance to thrive.