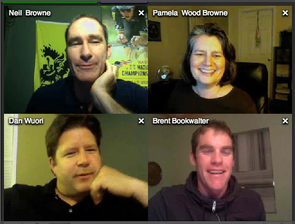 TourChats started as live race chats for cycling fans during the Tour de France. This grew into a web show twice a month on Sunday evenings. We used Vokle.com and then Spreecast.com so we could have co-hosts and guests on live. Audience members could ask questions via webcam or text. The recording of the live show is available as podcast.*

Starting with the Tour de France in 2010, we produced live chats for Versus.com. When Versus.com was removed (after the merger with NBC/Universal) along with its unique content for cycling fans, we started producing interactive online events independently as TourChats for Cycling Fans.

In 2011 we ran a successful Kickstarter campaign creating some fun rewards for TourChats fans.

* Beginning with Show 56 we only produced an audio podcast of the live show because of Spreecast content distribution limitations. However, the Spreecast video recordings are available to watch. The website is no longer available but there are show clips on our YouTube channel.