I’ll never forget how disoriented I felt in 2013 when my now ex-husband moved to California temporarily for a job, even though I knew that we’d be visiting each other regularly. The day he left I had nearly finished putting on two completely different shoes when I realized what I was doing.  That moment paled in comparison to this past September when our house sold in a week; I moved both my 93-yr-old mom and myself into a new apartment; and our 24-year marriage unexpectedly ended. I felt totally at sea – like I had been teleported to an alternate reality.

When it looked like we would be divorced in December, I was determined that it would be the “capstone” to a couple of years of big losses that began in 2018 with the unexpected end of a project that I was passionate about and then was followed by my sister losing her battle with cancer. I was looking towards 2020 as a fresh start and was ready to move on after seemingly relentless loss and grief. But life rarely happens so nice and neat for you. A few factors delayed our divorce including the whole world being hit with the strange new reality of the pandemic.

Last week when I received the final notification, I realized that I had actually been divorced for 11 days (final hearings are by mail these days). Many friends and family already knew, but as I announced it more broadly I shared these thoughts:

I never imagined that I’d be glad there’s no Tour de France this July. I continue to be proud of what Neil and I created together as Browne Eye Media. It’s not every day that you find the new owner of your domain name put up your old content in memory of your publication: CarolinaCyclingNews.com

I have wonderful friends and memories from CCN and from the live chats we produced for Versus TV that started with the Tour de France. Developing those into our independent live show TourChats was an amazing experience.

As I go through boxes, I’m keeping an eye out for this TourChats koozie autographed by Phil Gaimon. It’s a keeper. 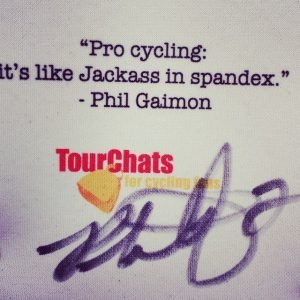 (If you never saw that episode of TourChats, here’s the clip with pro cyclist Phil Gaimon referencing the TV show Jackass.)