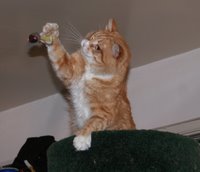 I’ve been watching a Harry Potter movie – one of my favorite activities when I’m feeling a little down. When I need a little magic and fantasy. My husband is in Idaho. His job has him traveling quite a bit which has been hard for both of us. While he is away our kitties keep me company. Weasley is our newest cat. He came into my life shortly after we saw the first Harry Potter movie. We couldn’t resist naming him after the red-haired family in the movie.

Before I made friends with Weasley we just called him the roof kitty. He was always hanging out on the roof and we thought he was one of the wild alley cats. I kept chattering to him as I walked by and finally one day he started to respond. I slowly started to earn his trust by feeding him closer and closer to the stairs that led up to our door. One day he got in my lap and curled up with his face buried against my arm. That day we realized that he had been someone’s pet and had been abandoned. He was so traumatized that it took a long time to slowly move the feeding dish up the stairs. When I first placed it inside our door, Weasley wouldn’t stay if I tried to shut our door. I ended up sitting in the doorway, honoring his fear while keeping our other cats from going out! The door was finally shut for short periods of time and eventually he was able to stay inside for longer and longer periods.

As it turned out our roof kitty is one of the most affectionate and most verbal cats I’ve ever known. I’m used to cats meowing to me when they want attention or want to be fed. I’ll hear Weasley meow and when I look to see what he wants, I realize that he is looking at our other cat Smokey. Weasley is always chattering to Smokey who has become his best friend. In the morning he loves to settle down close to my face and wrap both of his big white paws over my arm. What a delightful good-morning!