From the moment I first stepped out of the metro station in Washington, DC, bikes were everywhere. Bike racks were teeming with parked bikes. Well used bike share stations were often along my path. Ordinary people rode their bikes as they went about their day. One of my favorite moments, that I wish I had caught on film, was seeing five young professionals in their office-wear pedaling by on their lunch hour – a few of them on bike share bikes. I enjoy cheering on the bike racers (cowbell always at the ready), but riding a bike for everyday transportation – and for pure joy – has always been more my style. According to the League of American Bicyclists, “No longer is cycling a niche hobby for Lycra-clad athletes. Especially in cities like D.C., biking is tipping the scales as a healthy, hip and mainstream mode of transportation.” 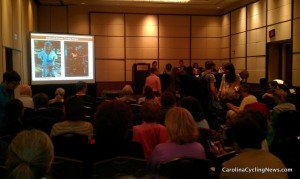 On the first day of the National Bike Summit, women from around the country gathered to attend the first National Women Cycling Forum with a diverse panel of women leaders. The keynote speaker was Sue Macy, author of “Wheels of Change: How Women Rode the Bicycle To Freedom.” She shared stories that brought back to life the forgotten history of women and bikes. The book is now on my must-read list. The panelists represented different aspects of bike advocacy and the bike industry. Among the issues discussed were the lack of women in images of cycling in the media. You are more likely to see the image of a middle-aged man in Lycra (known as MAMILs) than your average woman on a bike. 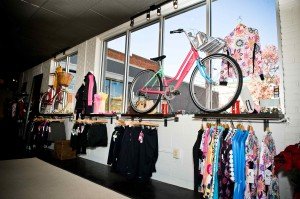 Bike shops were also discussed as both the gateway to biking in general and to a career in the bike industry. If women don’t feel comfortable in bike shops, then it is not surprising that women are less likely to bike or be in positions to make sure the bike industry is serving the needs of women cyclists. The importance of having safe infrastructure was emphasized. People will be more likely to get on their bike if they feel safe on the roads – especially moms who are often transporting children. There were plenty of laughs, like when Marla Streb said that bike shops need to clean their bathrooms. Robin Bylenga was inspired by her own experience in the bike industry to create Pedal Chic in Greenville, SC – a shop designed to be a woman-friendly space and that also showcases the trend in cycle-chic wear. 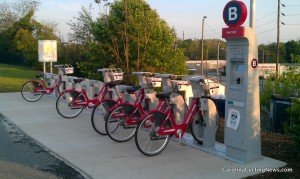 The Association of Pedestrian and Bicycle Professionals held its third annual Women Cycling Webinar on Wednesday, “Empowering Women to Bicycle for Transportation.” Fionnuala Quinn of Alta Planning +Design talked about the success of the Capital Bike Share program transforming the conversation about bicycling in DC and said, “We really believe that bicycles have the huge capability to improve women’s physical and economic wellbeing, as well as just making life more fun every single day.” Spartanburg has a bike share program developed by Partners for Active Living and I recently visited the Rail Trail station with bikes waiting for a ride on the Palmetto Trail. 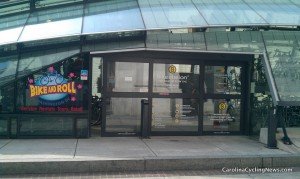 The webinar, like the forum,  included inspiring stories about work being done around the country by women advocates. Programs range from making safe spaces for women to experience mountain biking to transforming the lives of low-income women. The recording is available on the Women Cycling Project website. The women attending the webinar were encouraged to continue the conversation locally by organizing a forum in their area. They also mentioned a few upcoming events to get involved in. The Get Up and Ride National Bike Challenge begins on May 1st – also the start of National Bike Month. CycloFemme is organizing rides for women on May 13 and one is being organized here in Greenville, SC from downtown Greenville to Travelers Rest.

This is the 3rd post in a series on the 2012 National Bike Summit. Coverage sponsored by the Greenville Spinners Bicycle Club and Bike Law.

11 thoughts on “Women key in growing biking for transportation”